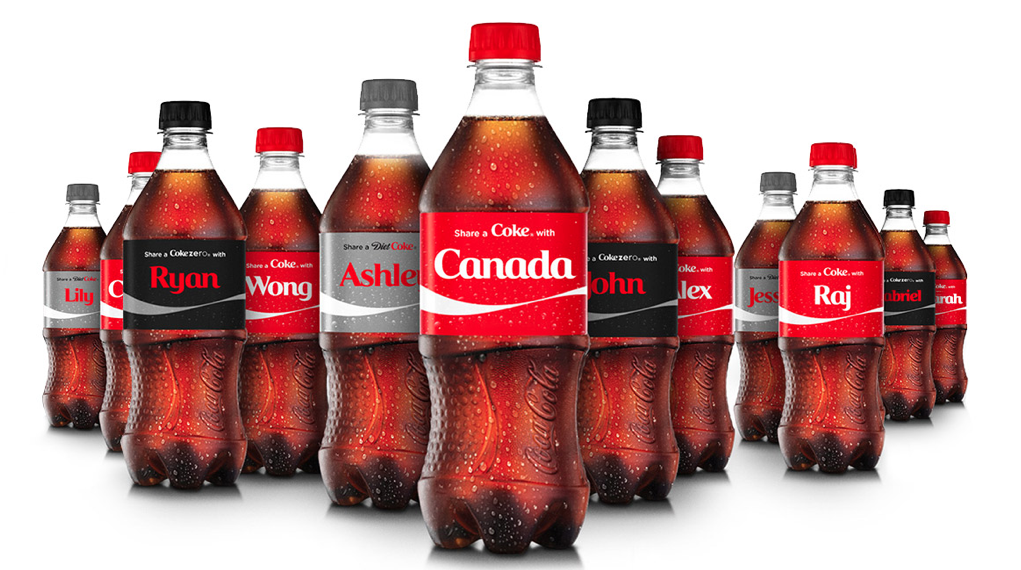 
If you thought that only niche, high-value, big-ticket or premium brands could provide customized and personalized experiences, you would be wrong. In fact, during the summer of 2013 and 2014, Coca-Cola, the world’s largest beverage company, rolled out  ‘Share a Coke,’ a customized marketing campaign in 70 countries, including the USA and Canada. Who would have thought that a ubiquitous brand such as Coke could customize their marketing?

Well, quite simply, Coke replaced their usual branding with a few hundred of the most famous names in each respective country. Popular names like John, Ashley, Wong and  Ryan so that at least 40% a country’s population could find their own name or that of someone they knew on a Coke. This is why the campaign sentiment was on ‘sharing’ to broaden the appeal. Let’s face it, thirsty or not, if you found your name on a Coke you couldn’t help but buy it. If you found the name of someone you cared for, then guess what, you had to buy that too! If your parents were the “creative types” who wanted to buck the usual naming conventions of the day, the clever marketing team at Coke thought of you too. Let’s say you had a grandma-shocking moniker such as Agape, Simba, North or Rocket; you could visit Coke’s website and order a virtual Coke to go. Coke even added generic titles like Mom, Dad, Mate, Dude, Family and BFF, etc. so no one would be left out.

The brilliant thing about this customized marketing idea is that instead of customizing the product, Coke simply customized its packaging. In reality, they simply pre-customized it. Sure the personalization of Coke would have been a complex and challenging initiative, but was it worth it? Absolutely.

You bet it did. Before taking it global, Coke first tested the campaign in Australia in 2011 with very positive results. Millions of Australians (remember there are only 23 million of them) got together and shared a Coke either virtually or literally, buying over 250 million named bottle and cans – That’s more than 10 personalized units per person! As per Coca-Cola’s 3rd Quarter 2014 earning report, global volume grew 1% in the quarter and 2% year to date Q3 2014. 1%-2% growth may not seem like a lot, but when you note that the category has been in decline for 11 years in a row. [i]  Not bad for Coke, but relatively bad for Pepsi. The ‘Share a Coke’ campaign even picked up seven awards at 2012 Cannes Lions, otherwise known as the Oscars of the advertising world.

According to Lucie Austin, who at the time was director of marketing for Coca-Cola South Pacific in Sydney, the birthplace of ‘Share a Coke’ (see more of her interview with Jay Moye, Editor of Coca-Cola Journey), the campaign capitalized on the global trend of self-expression and sharing.[ii] It allowed consumers to express themselves through a bottle of Coke, and to share the experience with someone else.

So what can we learn from the ‘Share a Coke’ campaign? In this ‘age-of-me,’ consumers want to feel unique and thus, giving them something personalized and affordable is an excellent way to beat the competition.